Now that we have a test folder in the app, we can start to increase our test coverage.

You can view and download all files at Walkthrough – Step 28. 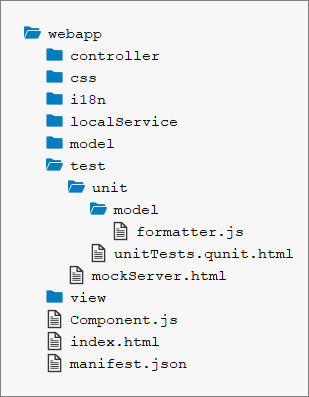 Folder Structure for this Step

We add a new folder unit under the test folder and a model subfolder where we will
place our formatter unit test. The folder structure matches the app structure to easily find the corresponding unit tests.

We create a new formatter.js file under webapp/test/unit/model where the unit test for the custom
formatter is implemented. The formatter file that we want to test is loaded as a dependency. We also need a
dependency to the ResourceModel, because we want to check if the translated texts are correct.

The formatter file just contains one QUnit module for our formatter function. It instantiates our ResourceBundle with
the localized texts in the beforeEach function and destroys it again in the afterEach function.
These functions are called before and after each test is executed.

Next is our unit test for the formatter function. In the implementation of the statusText function that we created in
step 23 we access the ResourceBundle with the following queued call: var resourceBundle =
this.getView().getModel(“i18n”).getResourceBundle();.

Since we do not want to test the controller, the view, or the model functionality, we first remove the dependencies by replacing these
calls with empty hulls with the help of SinonJS and its stub method. This happens in the Arrange
section of the unit test. SinonJS injects a stub method for all objects so we can simply call this.stub() to create a
new stub for any behavior we need to mock.

Test stubs are functions with pre-programmed behavior. They support the full SinonJS test spy API in addition to methods which can be
used to alter the stub’s behavior. If this part is a bit confusing have a look at the official SinonJS documentation for test spies or
ignore it for now, it will become clear later on.

Then we bind our stub to the statusText formatter by calling the bind function of JavaScript. The
this pointer is now bound to our controller stub when the function is invoked using the variable
fnIsolatedFormatter and we can still pass in arguments as we like. This happens in the “system under test” part
of the test.

Finally we perform our assertions. We check each branch of the formatter logic by invoking the isolated formatter function with the
values that we expect in the data model (A, B, C, and everything else). We strictly
compare the result of the formatter function with the hard-coded strings that we expect from the resource bundle and give a meaningful
error message if the test should fail. We hard-code the strings here to identify issues with the resource bundle properties. If a
property was missing, the test would still be successful if we check against the real value (that would be an empty string on both
sides) from the resource bundle.

The so-called QUnit test suite is an HTML page that triggers all QUnit tests for the application. Most of it is generating the layout
of the result page that you can see in the preview and we won’t further explain these parts but focus on the application parts
instead.

Let’s start with the namespaces. Since we are now in the webapp/test/unit folder, we actually need to go up two levels
to get the src folder again. This namespace can be used inside the tests to load and trigger application
functionality.

First, we load some basic QUnit functionality via script tags. Other QUnit tests can be added here as well. Then the HTML page loads
another script called unitTests.qunit.js, which we will create next. This script will execute our formatter.

This script loads and executes our formatter. If we now open the webapp/test/unit/unitTests.qunit.html file in the
browser, we should see our test running and verifying the formatter logic.